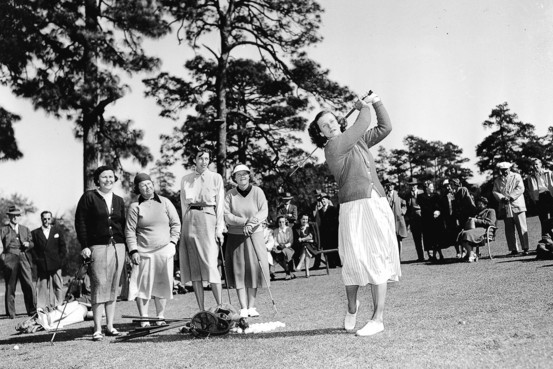 Golf has been around a long time. This means there are a lot of footprints from the past. What sport has allowed an individual to be successful on a professional level in another sport?

Here is your golf history:
1. ELLSWORTH VINES – American Tennis Champion. The world’s #1 player. Won the Pro Slam Titles on three different surfaces. He later became a Professional Golfer and won three (3) titles on the PGA Tour. He had great natural athletic ability. He was twice in the top 10 of golf money winnings, and surely the best athlete in the two sports. He was often accused of being lazy.
2. BABE DIDRIKSON ZAHARIAS – Olympic Gold Medal winner in Track & Field. An All-American Basketball player and played Professional Basketball. Later, she won thirty-one (31) professional tournaments after winning sixteen (16) consecutive amateur events. The professional events included ten (10) major championships. She was also a champion in bowling and tennis.
3. SAMMY BYRD – The only player to have played in the World Series and the Masters Tournament. He won six (6) tour events. He played professional baseball for the New York Yankees and the Cincinnati Reds. He is often credited with coaching Babe Ruth’s hitting technique by advising him to keep his arms connected to his body while batting. Sammy Byrd was also the coach for Jimmy Ballard who taught “Staying Connected” in the golf swing.

This is enough. Imagine playing two sports professionally! There are a lot of talented athletes….But, being a champion in two different sports, now – that’s talent!